“The conclusion we reached was that individual CBT was the most cost-effective thing you could do for patients with social anxiety disorder in the long term, and it doesn’t have the side effects you have from taking medication.”

Individual cognitive-behavioral therapy (CBT) may be more effective than pharmacotherapy for treating adult patients with social anxiety disorder, and it has fewer side effects and may be more cost-effective over the long run, new research suggests.

A meta-analysis of 101 trials with more than 13,000 participants with the disorder showed that individual CBT had the largest effect sizes and “should be regarded as the best intervention for initial treatment,” write the investigators. This form of talk therapy showed significantly better outcomes than psychological placebo, psychodynamic psychotherapy, interpersonal psychotherapy, and mindfulness training.

“The good news is we found a lot of interventions were better than doing nothing. Specifically, there was very good evidence for one-on-one cognitive-behavioral therapy,” lead author Evan Mayo-Wilson, DPhil, research scientist in the Department of Epidemiology at Johns Hopkins University Bloomberg School of Public Health, in Baltimore, Maryland, told Medscape Medical News.

“There’s a push in a lot of healthcare services to move towards a stepped-care model, where you’re trying to save money by doing therapy in groups. But we found that individual therapy was by far the most beneficial and worth the added cost. And compared with medication taken over a long period of time, talk therapy is actually more cost-effective.”

Dr Mayo-Wilson reported that the findings have led to new treatment guidance in the United Kingdom, where he previously worked.

The study was published online September 26, 2014 in Lancet Psychiatry, and is available here.

First Study of Its Kind

Dr Mayo-Wilson noted that although pharmacologic, psychological, and self-help interventions can be used to treat social anxiety disorder, no previous study has compared all of these interventions to determine which is most effective.

He also noted that previous studies suggest that individual CBT has a lower risk for treatment-related adverse events than pharmacotherapy.

The primary outcomes for the meta-analysis were effects on symptoms of social anxiety, as shown in validated measures, vs. “a common reference condition” (wait-list reference). Of the trials that included a control group, 28 used a wait-list reference, 42 used placebo pills, and 6 used psychological placebo.

Results showed that psychological interventions that were efficacious compared with wait-list references were individual CBT, group CBT, exposure and social skills, self-help with support from a book or the internet, self-help without support, and psychodynamic psychotherapy. Promotion of exercise and “other psychological therapies” (which included supportive therapy, mindfulness training, and interpersonal psychotherapy) did not show greater outcome effects than the wait-list reference.

Individual CBT was the only class of psychological intervention to perform better than psychological placebo and pill placebo. It also had greater effects in head-to- head comparisons with psychodynamic psychotherapy and the class made up of interpersonal psychotherapy/mindfulness/supportive therapy.

Although the MOIs and benzodiazepines had the largest class effects, the investigators note that the evidence for these agents was limited compared with that for SSRIs and SNRIs. In addition, more of the participants received SSRIs and SNRIs (n = 4043) than any other intervention class. SSRIs and SNRIs also showed greater effects than pill placebo (SMD, -0.44). 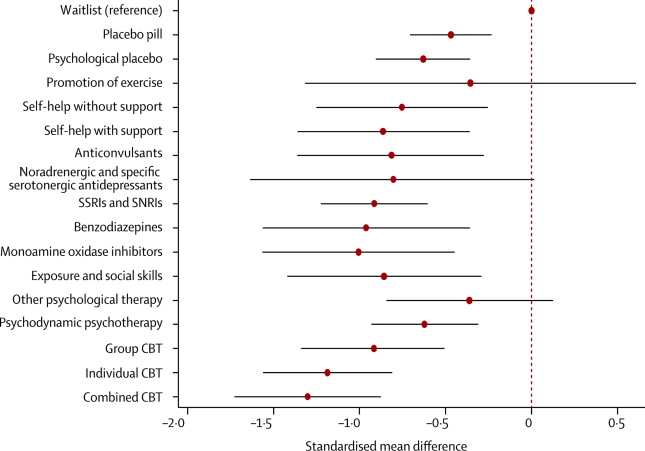 See table for more detailed results of this meta-analysis.

Because there was little evidence of differential efficacy within or between classes of drugs, differences in tolerability and side effects are especially important when choosing treatment, note the investigators.

“SSRIs and SNRIs with a short half-life…are associated with the greatest risk of discontinuation effects,” they write. “Some side effects such as increased agitation and sexual dysfunction can be especially distressing for people with social anxiety disorder.”

The authors add that these issues should be discussed with patients before starting treatment. In addition, they note that most patients who respond to an SSRI will relapse within a few months if the drug is discontinued after acute treatment ― and 25% of those who continue treatment will still relapse within 6 months.

However, if a patient declines talk therapy, the investigators recommend treatment with an SSRI. “Other drugs are recommended only for people who do not respond to initial treatment.”

Dr Mayo-Wilson noted that his investigative team examined cost-effectiveness of the therapies, the results of which will be reported in a separate article, and found that group therapy “was not worth the money” vs. individual therapy. “The conclusion we reached was that individual CBT was the most cost-effective thing you could do for patients with social anxiety disorder in the long term, and it doesn’t have the side effects you have from taking medication,” he said.

Pim Cuijpers, PhD, from the Department of Clinical Psychology at the VU University Amsterdam, the Netherlands, and Prof Dr Annemieke van Straten, from the EMGO Institute for Health and Care Research in Amsterdam, write in an accompanying editorial that the meta -analysis is “an important next step in improving our knowledge” about social anxiety disorder treatments.

“The findings confirm that both psychological and pharmacological treatments are effective, and that the effects of these treatments are large,” they write. “The message that social anxiety disorder can often be treated successfully is important from a public health perspective, and would certainly be a good subject for an educational public campaign.”

The editorialists note that although the investigators write that individual CBT is better than SSRIs/SNRIs because of the latter group’s high relapse rates, “the long-term effects of treatment could not be included in this meta-analysis because the number of studies examining this was too small.”

“To really help patients and reduce their distress, long-term trials on drugs and psychotherapy are urgently needed,” the editorialists write.

Still, they conclude that the promising findings from the current analysis are “good news for our patients!”

FAIR USE NOTICE:  This site contains copyrighted material, the use of which has not always been specifically authorized by the copyright owner. It is being made available in an effort to advance the understanding of mental health, environmental, political, human rights, economic, democracy, scientific, and social justice issues.  It is believed that this constitutes a “fair use” of any such copyrighted material as provided for in section 107 of the US Copyright Law. In accordance with Title 17 U.S.C. Section 107, the material on this site is distributed without profit to those who have expressed a prior interest in receiving the included information for research and educational purposes.

If you have any questions or comments, please email Larry Cohen, LICSW, with offices in Washington, DC.